Violence Against Women Must Be Recognized and Stopped Around the World
Rep. Mike Honda06/13/14 11:23 AM ET

The wages of war, and of natural disasters, are obvious. We see pictures, and hear stories, of battlefield injuries, people swept away by floods, and the loss of property, homes, and lives. However, time and time again, in periods of conflict and disaster, the most unspeakable cruelties are inflicted on the bodies of women and children. Violence against women is an ongoing cycle and threat which must be eliminated. Violence upon, and trafficking of, women are the worst kind of atrocities. As we have seen in Rwanda and Bosnia-Herzegovina, and continue to see in Syria and the Democratic Republic of Congo (DRC), the amount of gender-based violence in these former and ongoing conflicts is abominable. In fact, United Nations labeled the DRC as the "rape capital of the world." The UN says that 48 women are raped every hour in the DRC, and rape camps are destroying the lives of babies, young boys and girls, and women and men. Last month, the world learned of the brazen and brutal kidnapping of nearly 300 girls in Nigeria by the Boko Haram. The kidnapped girls' only crime was pursuing their human right to an education. They were woken up, herded in the middle of the night, and taken from their families. In a letter that I led on, which was cosigned by over 170 of my colleagues in Congress, I called on President Obama to seek action at the United Nations to address Boko Haram's threat of further human rights violations. As the representative of Silicon Valley, a member of the Tom Lantos Human Rights Commission, a returned Peace Corps volunteer, an ardent proponent of human rights, and most of all, as a father, I have fought for programs and legislation that empower and protect victims, boost prevention services, and eliminate the scourge of modern-day slavery. Issues like these are why I have been fighting for the past 20 years to bring justice and reconciliation to the 200,000 Korean, Chinese, Filipina, Taiwanese, and Dutch women who were trafficked into sexual enslavement during WWII by the Imperial Armed Forces of the Government of Japan. These so-called "comfort women" were taken from their families and stripped of their youth; coerced into savage conditions at the "comfort stations" throughout the Asia-Pacific region. These women have waited three-quarters of a century for the government of Japan to formally and unequivocally apologize. Sadly, today, there remain less than 100 survivors -- most of them in their 80s. Time is a commodity they cannot afford. Just last week, on June 8, Bae Chun-hui passed away at the age of 91 years old.

I have met and shared meals with Bae and the other surviving women -- and have been inspired by their spirit. To this day, I am haunted by the words of Lee Yong-soo, one of the 53 remaining Korean survivors: "If the Government of Japan cannot apologize, then return to me my youth." The "comfort women" issue is not a historical, Asian, or women's issue; it's a human rights issue. As long as violence against women exists, the "comfort women" issue remains relevant.

Whether in conflict zones, or post-disaster relief and recovery, ensuring protections for women and girls begins with ensuring women are sitting at the decision-making table. In 2011, the Obama Administration released the historic U.S. National Action Plan on Women, Peace, and Security to support women's voices and perspective in decision-making in countries threatened and affected by war and violence. I, with my colleagues Congresswomen Schakowsky, Bernice Johnson, and Tsongas, introduced the Women, Peace and Security Act of 2013 (WPS Act), which will ensure the full and responsible implementation of U.S. NAP.

I am also an ardent proponent of the International Violence Against Women Act (I-VAWA), which was introduced by Senator Barbara Boxer and Congresswoman Schakowsky. I-VAWA would make ending violence against women a priority in all diplomatic engagements and foreign assistance from the U.S. Both the WPS Act and I-VAWA should be passed immediately. To change the culture of violence against women we must first change the attitudes of men. On this Father's Day, and every day for that matter, we must engage boys and men as partners in the eradication of gender based violence, once and for all. The cycle of violence begins with men -- men who would say "no more, not ever."

Reconciliation is something our entire generation should rightfully be calling for in order to promote a peaceful, global society. 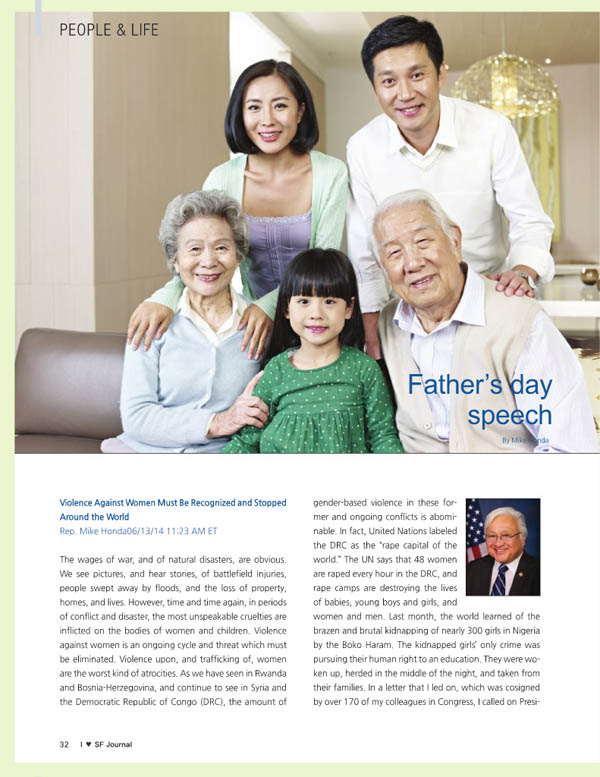 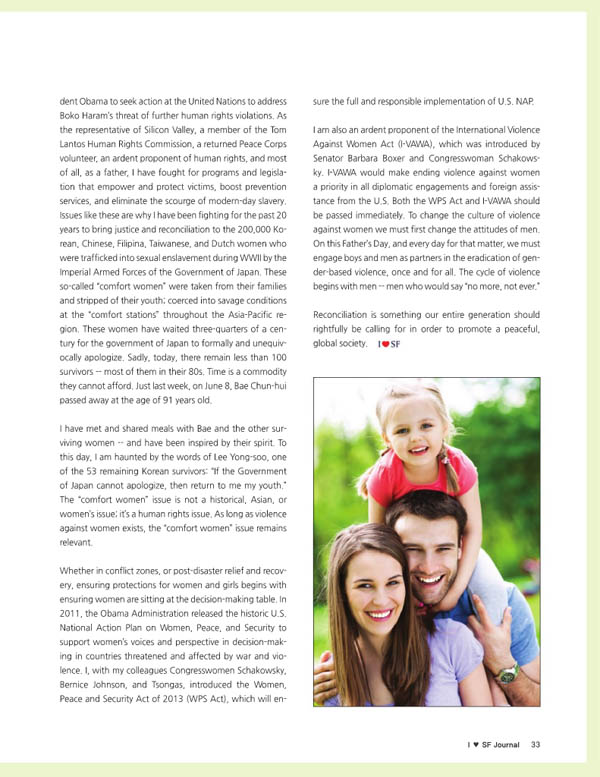