Q : Could you tell us about bit about yourself? Self-introduction
A : My name is Catherina Yoosun Min. I was born in Korea and came to the US when I was 12 years old to Fredericksburg, a small town in Virginia. My whole family, my three siblings and mom and dad came. We were one of the very few Koreans families in Fredericksburg. I had a really good childhood there, it was actually quite a good assimilation into the US culture. I was actually a school president of my high school, which had around 5,000 kids, and the editor of our school newspaper. Then I attended the University of Virginia and double majored in rhetoric and communication studies (RCS) and English. I took RCS because, at that time, I thought I wanted to be the new Connie Chung (the second woman and first Asian to anchor a major US news network). Once I got to college and I interned at a few TV stations I realized that I really wanted to go into law so I picked up an English major because I really wanted to make sure my writing was really good. I went to University of Virginia law school, so same school seven years. Then, during the summer of my second year, I came to San Francisco for a summer internships and I was at a firm alled Cooley Godward and got an offer. So after I graduated in 1990, I moved out to San Francisco and it was great; it was actually a tough decision but I think I'm really happy I made that decision. After about four years there—doing corporate work, helping startups, doing venture capital work, doing public offerings, and mergers and acquisitions—I then was recruited to go work in Korea at a firm called Shin & Kim. I moved there in 1994 and I was their senior foreign US lawyer until 1998. Then, in '98, I moved back and I've been in the Bay Area since, doing a lot of work with Korean companies as well and domestic companies.

Q:What is one of your Favourite Memories?
A:One of the really neatest things that I have done was going back to Korea. Going back, I was 29 years old and hadn't really been back (I only went back once to see my family). Really learning what Korea is like on my own terms, not just through my parents, and relearning the Korean language, really as a professional—legal, accounting, business language—and learning about the culture and really getting to know the clients—I used to lecture a lot at some of the big Korean companies—and I think that's really contributed a lot to my professional success as well as my personal satisfaction because I was able to parlay that experience into a good Korean practice here. I head the Korean practice group at Reed Smith as well as a few other things I do. It's been a really rewarding thing, not only professionally but also personally.

Q : What do you consider your Identity to be?
A : I feel like what I am is a Korean American who is quite knowledgeable about Korea and can be a bridge between the two countries and that is something I am very proud of and I feel very good about. Not only for work, I help a lot of companies come here and buy companies or sell companies and that's something I think a lot of them are very happy with and grateful because they say to me all the time "We couldn't have made this deal without you being able to explain what's going on in Korean," but also on a personal level by being able to bridge those two gaps between the countries. That is something that I am very porud of.
Once I got to Korea, I realized the challenges that Koreans and their businesses face and how different things are here. Just because they understand some English or speak some English doesn't mean they understand the nuances of what is being said to them or what they really want and being able to explain that to them, especially in a legal sense, is very gratifying.

Q : What is your job like? What's the appeal in it?
A : On top of being an M&A (merger and acquisition) lawyer, I'm also head of management in my firm. There's about 1,800 lawyers and it's one of the top 15-20 in the world. There's 26 offices worldwide. I have been the office manager of this office (the Silicon Valley office) and this past fall they asked me to step down from that role and take on a much more global role of being a vice-chair of half of the firm. Our firm is divided into two big halves, with a lot of practice groups under that. One half is litigation and the other is business and finance. There's two vicechairs and one chair. The other vice-chair and the chair are both in London, London being our biggest office at this time. I'm the only vice-chair in the US. It's been an interesting job for me because, usually, you don't see a lot of women and minorities in the upper management of big law firms and so I was very honored to be asked. I believe it's allowed me to bring a different perspective on this job which is setting compensation, deciding who gets partners helping with strategy, etc. Also, it's being a role model for other women and minorities because I do think it's good for them to know "yes, it is possible." The fact that there haven't been many [women/minorities in upper management] in the past doesn't mean it's not possible.

Q : What are your Hobbies, both current and ideal?
A : Right now, just because time is so limited for me, I try to do as much stuff that my children are doing and do it with them. My husband also a partner at another law firm. We are both really active parents. We are really supportive of each other's career and our children, knowing we we just have to spend as much time with them because our jobs are quite demanding time wise. It's not a 9-5 job. A lot of my free time really is spending time with them, doing what we like doing. We'll go on walk. If they're doing sports, that's what I end up doing: sitting on the sidelines while my husband coaches the soccer teams or basketball or volleyball If I were to just spend time for me, I would really love hiking with some girlfriends and getting out to nature. I do like to play golf, but I'm horrible at it. I actually haven't played in around 10 years, ever since my first daughter was born. What my husband and I plan to do is, we hope that our daughters will at least like to play and maybe the four of us can start again. My husband is very hopeful that maybe they have some of those Korean women golfer genes but I told him, "I know there's a lot of Korean women who are good, but look at me! I'm horrible and these are my daughters, so don't expect them to be good."

I love to read and that's my absolute passion so, any time I get, I read. I have audible books in the car and, even when I work really late, I actually always wind down, even at 2 or 3 in the morning, I'll read for 10 minutes. I've been a book worm all my life.

Q : What do you want do in the Futuer?
A : I do want to do even more with public service and community service. I have served in a lot of different public service organizations—I've been the president of the Korean Bar Association, the Korean American Chamber of Commerce, one of the founding members and chairwoman of CKA (Council of Korean Americans)—so I've done some, I feel, really good things for other Korean Americans.
That's been my big focus. I do some work for Asian Americans at large and some women organizations, but the one I've been most active in is been with the Korean Americans. But wherever I go and speak, or share my stories and others, I'm just so gratified. A lot of people email me afterwards and say "I really took to heart what you said. I asked for a raise" or "I asked for a promotion and I got it! Thank you so much!" Things like that really make me feel that we're all part of this world for a purpose.
I'd like to continue to do that, however that works out. Right now, I'm really quite busy with what I have and this is quite important, being at this firm and having the management because I feel like I can see the impact that I'm making here. I have a busy home life at the moment and, especially in the next few years, it's important that I be home. But after that, if there is an opportunity for me to reach out to more people (it could be a book, it could be a blog), I'd like to explore that. It's not because I think "I'm so great." It's because I think I've been put on this Earth and I want to leave it a better place and have helped and touched other people. This really goes back to when we moved here and we really didn't have a lot of money. My parents worked in manual labour because they didn't speak English. We survived for quite a long time, and still do sometimes, on the kindness of strangers and the kindness of friends. This country is really a blessed country because there's so many people who help others without expecting them to do the same.

Q : Any advice for youth, especially those who want to follow the same path? Any other closing comments?
A : One, I think that a lot of our parents, especially in my generation, were not business people. You didn't sit at the business table and talk about things that are very business savvy. We are told many times "excel at school and everything will be okay. Don't make waves. Do a good job and you'll be recognized and people will take of you." Very traditional, a little bit Confucian. In many ways, Korea has done really well with that hierarchical thinking. I think that it is time for us to think a bit differently and I think that we as Asian-Americans need to understand the role of self-promotion and marketing and having your own brand and going for what you want instead of waiting to get recognized because, sometimes, that just takes too long. There's a lot of other ethnicities that are not so burdened by that sort of thinking that do much better much faster. You do have to play politics. Don't sit back and try to be the one that is the execution person and just do the work. Yes, you probably will do okay and you'll be comfortable, but if it's in you to go further than that, then you have to speak up. You have to say something strategic at a meeting. Don't just be the wallflower. Don't sit back and wait for it to happen. Carpe Diem.
Second, get yourself a mentor. Most people have one. If you don't, you're losing out on getting great advice from somebody who knows. Find them in different ways and be a mentor-able person, who will go and seek out advice. Don't wait for someone to come and say "I'll be a mentor" because that's not going to happen . 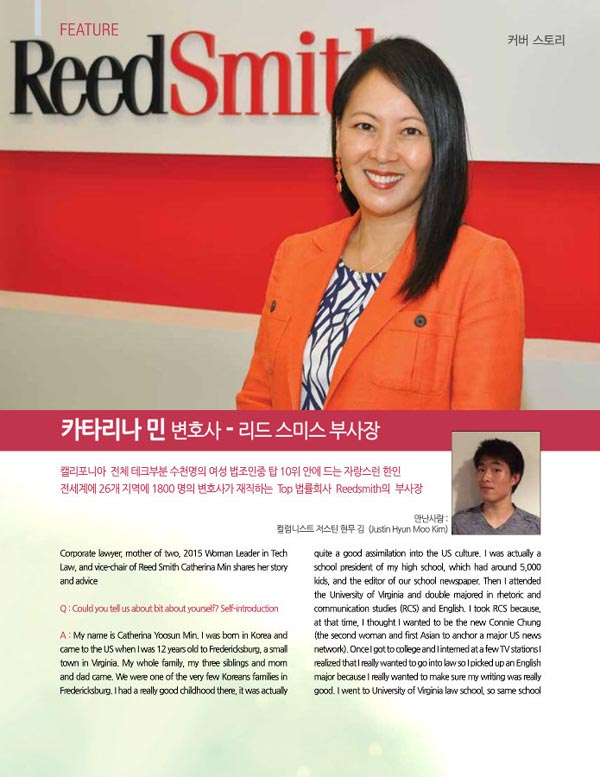 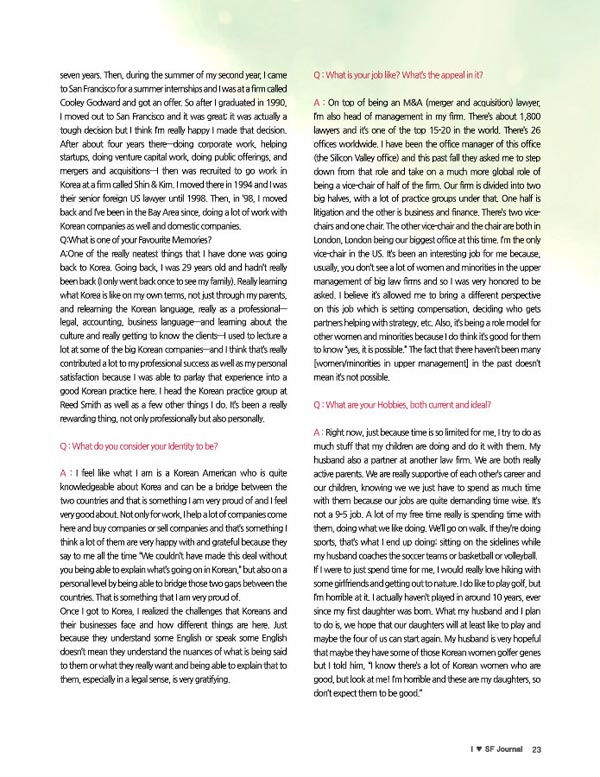 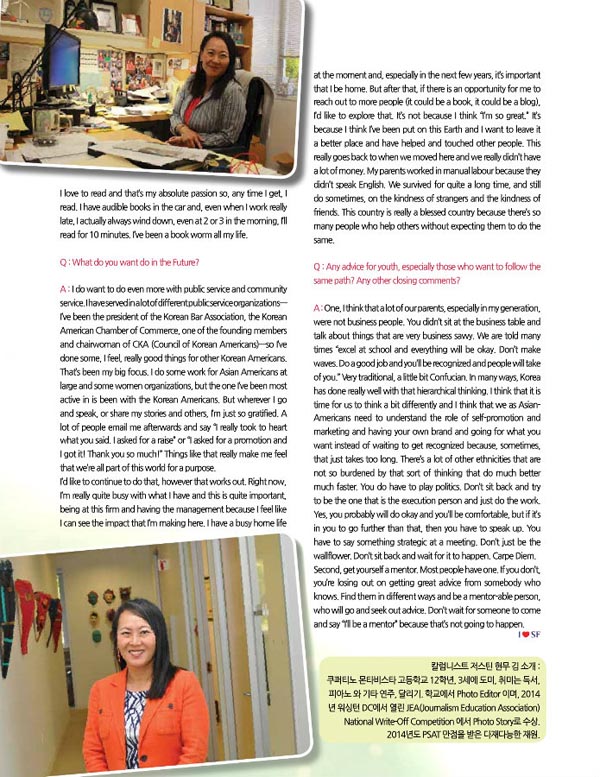