After being chosen as one of three winners out of 35 start-ups at Plug and Play's demo day, Podo will be releasing 1,000 of their first generation cameras this November. We had the opportunity to sit down with Eddie Lee, President and Co-founder of Podo Lab to discuss the future of Podo and the "selfie".

Podo is a small, app-controlled camera that sticks on nearly anything. For instance, you could slap it on a wall, gather round in front, then use your smartphone to view and trigger the shot remotely. It's the easiest, simplest way to free your camera from the reach of your arm.
It's much better than using a tripod, a timer, or an embarrassing "selfie" stick. For one, you don't need to deal with any mounts or bulky equipment, and two; you still have complete control over how the picture turns out. The live Bluetooth feed is smooth with no delay, and pictures you take transfer to your phone in seconds.
People around the world love taking and sharing pictures and that's not changing anytime soon. We've created a fun, new way for people to do so, and I believe there's great social value in a camera that's not just limited to your point of view, but lets you be in your pictures as well.

Tell us about how it works.

We put a lot of effort ensuring Podo was easy and simple to use. It's small, (cute, I'd even say) slipping easily into a pocket or purse. To turn it on, there's no need to locate any buttons.simply grab the Podo and shake. Eight LEDs let you know Podo is awake, (power, status, etc.) and can flash for pictures in low light. And because Podo's controlled by our Podo app, taking a picture is just like using whatever camera app you're used to.
A key innovation came in the form of how we enabled Podo to "stick" anywhere. Podo had to be easy to stick on and take off, and it had to do this repeatedly without wearing out. Nature, in the form of the gecko's amazing ability to stick anywhere gave us the inspiration we needed. There is a gel pad on the back of the Podo that we call "microsuction", and we think you'll find it amazing. If it ever gets dirty, you can simply clean it with water and it'll stick again.

Next, we designed a freely rotating flap and hinge to attach the microsuction pad to. This lets the users hide and expose the pad, so it's not always sticking to the inside of your bag. It also lets the user hold an angle for the Podo, so you don't have to only shoot straight ahead from a surface.
I love Podo and I'm proud of what the team accomplished while designing it.I could go on and on but I'll leave you with some bullet-point specs instead:

How did you come up with the concept for Podo?

My cofounders (Jae Choi, Sam Pullman) and I were offered our first investment last year, with the caveat that we change away from the purely software startup we had been working on. Cue montage of us fruitlessly filling out whiteboards and trying to forcibly pull inspiration out of our heads. During one particularly unsuccessful session, I received a Snapchat from a friend. We had been taking a break at the moment but still I didn't want to disrupt everyone and take a ridiculous #brainstormfailselfie.
After the meeting, we got to talking about pictures, and sharing, and the moment of inner turmoil I had experienced. Overloaded on social media with terrible selfies and pictures of food, we realized that the only photos we appreciated were the ones that told stories about the people we cared about, not just the stuff they were looking at. What were they doing? What did that place look like? Were they laughing, smiling, crying? Faces are essential for communicating emotions and stories, but the convenience of pointing a smartphone at things was costing us the human context of these moments.
Podo began as this thought but has been growing ever since, and I love it. It's become a way for photographers, filmmakers, and artists to create new perspectives, a tool for dancers, cooks, anybody with a hobby, to share their passions, an affordable way to capture action in multiple angles, and more. One bride asked us for dozens for her wedding reception, to take a photo every few minutes and create an album of candid shots. I think the concept behind Podo is so simple yet freeing that people get really passionate and creative when they hear about it.

When will it be released?

We will begin accepting pre-orders in early November.but only 1,000 so get yours fast! You can find them at www.podolabs. com, or leave your email now to be notified when it's erady.

Creating hardware at scale is no easy task, and the entire team really deserves a ton of credit. The three founders, all of us graduates of UC Berkeley and roommates since this whole thing started, our first engineers John and Martin, our talented designer Benson, and the many, many other people who have helped us get to this point.
Podo is our passion, and I hope that you will be able to tell when you see the box, launch the app, and hold the product for the first time, and every time. Thank you for the opportunity to share my passion. Please visit our website (www.podolabs.com) for more, or to drop me a line.
What will you use Podo for? 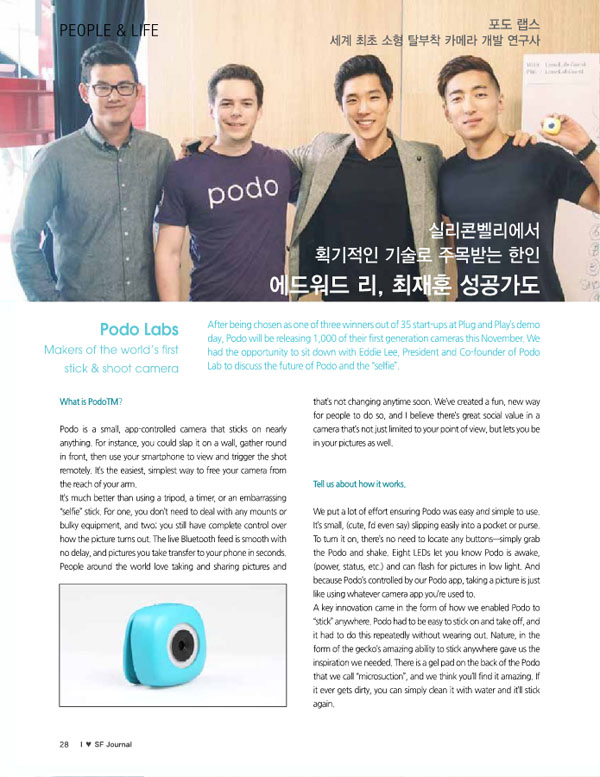