Looking Back In Awe
LIVING DANGEROUSLY IN AMERICA'S OWN KILLING FIELDS

Our Sa-i-gu (Korean for 4-2-9) marked the nation's first media- fanned bogus race war pitting minorities against each other in the city of Angeles in pursuit of Almighty Dollar and Ratings in the annual ratings sweep.

Looking back in awe, I dare say, however belatedly, that our Sa-i-gu didn't explode on that date, April 29.

Long before the 1992 L.A Riots, hardy Korean mom and pop storekeepers, along with long-suffering and stoic impoverished neighbors, had been living dangerously every waking hour, seven days a week, all year round in the seething inner-cities of America. Only God knows how many of these bedraggled newcomers from Korea some call them wannabe Kamikazes have been mugged, robbed, maimed and slain in their dogged pursuit of an elusive American dream in the Made-in-USA killing fields.

And how many widows and kids had to carry on with their existential days and nights and yonder. The figures may easily run into hundreds and even more. The open season on these mute and impassive merchants seemed without an end. As the editor of their lone English voice the Koreatown Weekly,

1979-1984, and Korea Times Weekly, 1990-1993, both based in LA Koreatown
I've covered too many hourly shootings and robberies and attended too many funerals not to be touched, outraged, awed and, above all, renewed by these newcomers from the war-ravaged peninsular who seemed to thrive on adversity even in defeat or death.

A couple datelines: Koreatown, 1991
Sept. 22: Chang Lee, 22. Shot and killed in evening outside liquor store on Olympic Boulevard in attempt to drive away in BMW when gunman demanded money and car keys. Aug.21 and 22: Shinchon Restaurant, Third Street and Oxford Avenue. Both Owners and patrons robbed as gunpoint two days in a row.
June 20: Grace Han, 47. Purse snatcher flees with $4,000 in Hyungdai from VIP Plaza parking lot on Olympic Boulevard. According to the Los Angeles Police Department, about 41 crimes were committed in Koreatown daily in 1991, including assaults, burglaries, thefts and robberies. The year prior to the eruption, the Koreatown district bounded by Pico, Beverly, Arlington and Hoover recorded 2,024 business and residence burglary; 2,527 robberies; murder 48; rape 84; general theft 1,837, auto theft and burglary 6,270; assault 2,162; miscellaneous 186, totaling 15,138, --- one of the most violent police Districts in the state and the nation.

A couple years before Sa-i-gu, I remember, Rosemead grocery store owner Hong Sik Shin, 44-year-old father of two, was gun down by two robbers during the Christmas holiday season.
But sill I can hear him admonish his younger son, Simon, then 13, over and over again: "I'm not telling you to study hard for my benefit, but for your benefit so you won't end up like me."
The elder Hong was working alone that fateful night when the gunmen entered his L.A. store to rob. He resisted their demands for money, police said. In moments he lay on the floor mortally wounded.
However inconsolable, his widow would take charge of the family's future.
She told friends she intended to reopen the store and run it herself. No doubt, Simon and his older brother, Frank, then 16, would be right by side.
It's been two decade since Christine Choe's brother was robbed and killed in the family's hamburger stand in Southern L. A. I still remember what she told a local reporter after she returned to work, after burying her brother only to find that their store had been burglarized again. "People don't care,'' she said. "They think we got money from God or something. My mom worked so hard for this."
No matter. Within a span of a month, not only her brother but three other fellow Korean grocers in L.A. were blown away during holdups. Only two weeks earlier, another Koreatown shopkeeper killed the same gunman who had robbed him six times in just 12 days.
As every Korean daughter would, Christine only thought of Korean lady who lost her only son, her first son, the one who is supposed to grow up to take care of her someday. Come what may, the Choe sisters were going to take care of their mom. Drying her tears, as she excused herself from the newspaper interview to return to her battle station, Christine swore as a-matter- of-factly.
"We are going to make it. I know that." How can I ever forget one spunky grocery lady named Ihn Kang Kim in Chicago.
She survived the March 25, 1979 nightmare in which she watched her husband murdered in the cold-blooded robbery of their Broadway store.
This story, as she told to a local reporter, ran in the April 28, 1979 edition of Koreatown Weekly, the first homicide article in the English weekly that I and teammates Steve Chanecka and Randy Hagihara had founded in LA Koreatown.
The couple had bought the store after six years of slave labor and penny-pinching, when a gunman came to rob and kill. The killer took $250 cash and watches from her husband, led them both into the store's dank basement, shot him and then fired the gun twice more and stabbed her.
The killer turned out the light and climbed the stairs and nailed the basement door shut. Her husband lay next to her, near death, gasping. Her hands reached out to cover his wound and stop the bleeding.
"Must we die like this? Must our dream end like this in ashes? I will not let my husband's dream be broken for nothing. I will not." Step by step, she crawled up the stairs, to the door that was shut. Shebegan to tear at the wall with her bare hands, scratching and ripping. Her skin came off her fingers, as she opened a hole and squeezed herself through it, to seek help from a passing car.

She lay in shock for weeks in the hospital. A month and a half later, she returned to reopen the store. "I will not go back to Korea," she said. "I will not move away from here. This store was my husband's dream. I will not let the dream be broken."
In the beginning it was hard: "I was crying inside, but I sing song every morning to myself. One is a Korean hymn that says, 'Soon the dark of night will come, while there is still light; don't waste time, work hard and good things will come.'
"That makes me strong, and I say, all night, I am young. I am in America, and I am on my way."

The survivors like Simon, Christine and Ihn Kang Kim have given life and substance to that elusive thing called the Koreans- never-give-up Spirit, which seems to endure even in defeat and death.
In their darkest hours they have shown us that luminous gift from the Land of Morning Calm.
As we silently grieve for our fallen dongpo (fellow countrymen), we die a little but carry on with our daily life the only way we, the people of Hahn, know by soul.

For millenniums, Jewish people have wandered this earth as pariahs, but those who left Russia and East Europe to escape pogroms in the middle 19th century have achieved the normalcy of life in the new world they had yearned for centuries.
It's a beautiful ending to an ancient story --- an epic with a great ending.
At the risk of being presumptuous or overly romantic, I'm tempted to envision the beginning of a tribe of the latter-day Diaspora wandering this vast continent --- the Koreans. It matters little that ours is only a century old. What matters is that it's a new biblical journey in so many ways. Somebody up in the Big Sky has chosen us for this 21st Centuryexistential challenge for our embedded collective wretchedness: age-old divisiveness, stubborn individualism, gleeful indifference to civil rules and common goals and ancient curse of self-loathing and mutual distrust.

Just maybe, God has endowed us with this gift for our survival on our storm-tossed earthly passage since time immemorial: that Koreans-never-give-up spirit called Stamina.
The end 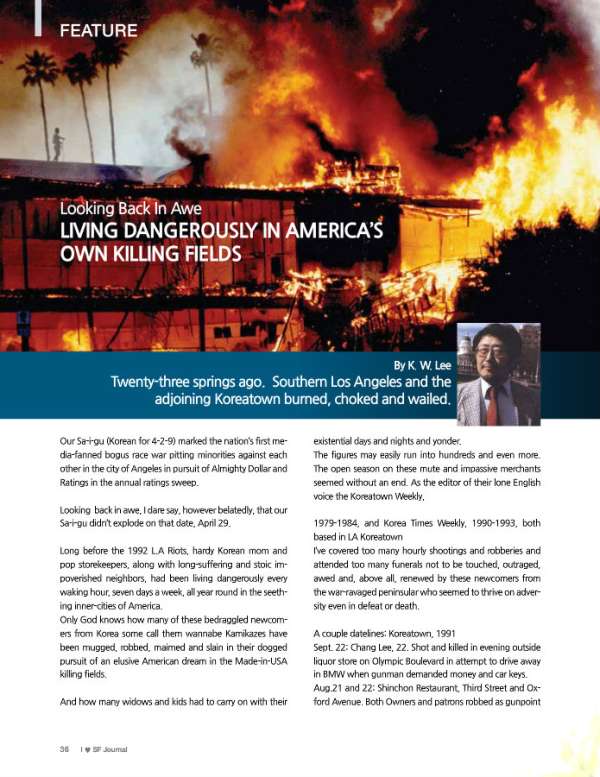 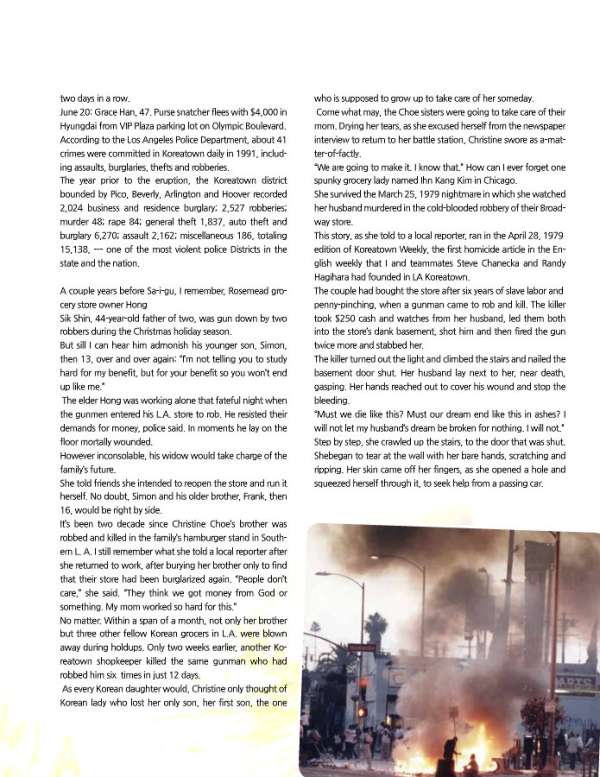